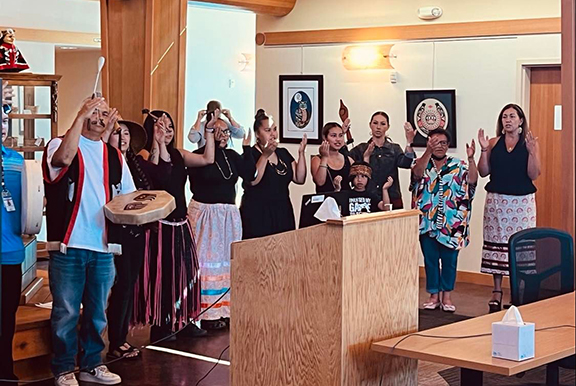 The Honorable Brandon Mack, Commissioner of the Clallam County Superior Family Court, worked closely with both the Lower Elwha Klallam Tribe and the Jamestown S’Klallam Tribe to create an ambitious ICWA training agenda for the gathering. For the 70 plus people in attendance this hard work paid off as the kickoff event captured both the spirit of ICWA as well as the black letter law, including insightful talks about recent Washington State Supreme Court decisions and their effects to the ICWA for the S’Klallam tribespeople. Another notable session was presented by Chairwoman Frances Charles of the Lower Elwha Klallam Tribe who shared her perspective as an Indigenous mother, auntie, grandmother, and foster parent on how the ICWA is important to tribal nations in keeping children connected to family and culture. During the event Vice Chairwoman Loni Greninger of the Jamestown S’Klallam Tribe shared that 497 Tribal Nations signed a recently submitted amicus brief for Brackeen v. Haaland case before the Supreme Court of the US.