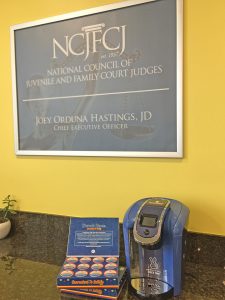 Dutch Bros Coffee, an Oregon-based coffee company, has partnered with the National Council of Juvenile and Family Court Judges (NCJFCJ) as their official coffee sponsor. Through their Love Abounds Foundation, Dutch Bros Coffee has donated one-year’s worth of coffee including Keurig machines to the NCJFCJ for conferences and meetings across the country.

“All of us at Dutch Bros Coffee and Love Abounds Foundation know that coffee is really a medium by which relationships are built and conversations begin,” said Jennifer L. Wheatley, executive director of Love Abounds Foundation. “Through the Love Abounds Foundation’s youth initiative, we recognize the work of the NCJFCJ of providing educational and judicial development to improve the day-to-day lives of children and families across the nation. It is not only admirable, but unbelievably important.”

Dutch Bros Coffee is the nation’s largest privately owned drive-thru coffee purveyor with more than 7,500 employees and donates more than $2 million a year to its local communities and nonprofit organizations. Love Abounds Foundation was established by Dutch Bros Coffee to actively engage its communities through giving and action. Love Abounds supports programs and projects that build deeper connections through engagement in the areas of youth, music, health, and origins.

The NCJFCJ, a Nevada-based 501(c)(3) organization, provides professionals involved in juvenile, family, and domestic violence cases with the knowledge and skills to improve the lives of the families and children who seek justice. Last year, the NCJFCJ hosted more than 300 trainings, meetings, and conferences nationwide with more than 13,000 judicial officers, attorneys, social workers, court administrators, law enforcement professionals, and educators in attendance to learn innovative and cutting-edge best practices in juvenile and family law in 41 states including D.C.

“We are thrilled to venture into a new corporate partnership with Dutch Bros Coffee and Love Abounds Foundation,” said Joey Orduna Hastings, NCJFCJ CEO. “The NCJFCJ relies on funding from federal and state grants, private foundations, and generous donors. It’s exciting to know that our national judicial leaders who travel across the country to get the best education will now be powered by Dutch Bros Coffee.”