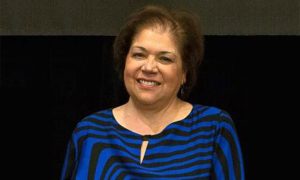 The NCJFCJ Honors One of Its Own:
Hon. Sheri Capes Roberts

The National Council of Juvenile and Family Court Judges (NCJFCJ) honors and celebrates the life of Newton County juvenile court judge, the Honorable Sheri Capes Roberts, one of Georgia’s nationally recognized leaders in juvenile and family law. Judge Roberts passed away on April 26, 2020.

Judge Roberts was first appointed to the juvenile court bench in 2009, Alcovy Circuit’s first female jurist. During her tenure, she established a Family Treatment Court accountability court, along with a supporting nonprofit entity, the SHIFT Foundation, to further assist families the court was serving. Through support from county sales tax funds, a community resource center was constructed and opened in 2018, allowing for additional cutting-edge intervention programs for the children and families served by the court.

Since 2009, Judge Roberts was an active member of the NCJFCJ, including her appointment to the Board of Directors in 2017. She provided her expertise not only to the Board, but to multiple committees including Curriculum Development, Legislative, and Finance.

A Newton County native, Judge Roberts completed her Bachelor and Master of Business Administration, as well as her Juris Doctor degree from the University of Georgia. She was admitted to the State Bar of Georgia in 1993.

Judge Roberts earned numerous honors and appointments during her service in juvenile and family law including the MacArthur Foundation Champion for Change Award. Under her leadership, her court was selected as a court site for a juvenile justice reform initiative sponsored by Robert F. Kennedy Children Action Corps, and as a juvenile detention alternative site for the Annie E. Casey Foundation.

The NCJFCJ honors and celebrates Judge Roberts’ lifelong commitment and dedication to the children and families she served on and off the bench.

Judge Sheri Roberts also served the NCJFCJ by active participation with their research arm in Pittsburgh, the National Center for Juvenile Justice. Her knowledge of finance, business, and government was invaluable to NCJFCJ, the state of Georgia, and her judicial circuit. Throughout her career, she made every effort to serve children and families to assure safety, permanency, and well-being. While she has physically left us, her passion and wisdom remain with us as we continue this work in trying times. Let us focus on the work as she has done not only with passion and wisdom but also with humor, precision, and insight into both human nature and systems operations. Thank you, Judge Roberts, for you have given much to each and every one of us.

Judge Sheri Roberts was an outstanding jurist and a good friend. She was a real bulldog or, in honor of her beloved University of Georgia, a real Bulldawg, who was driven to lead her court and her court-community to the leading edge of court practice and beyond. I was honored to be in leadership at the NCJFCJ when Sheri took the bench, and it was great to have such a new young judge, not just willing to do the work of the NCJFCJ, but really wanting to do the work. As recently as last year, she was fussing at me for not asking her to do more.

The last time I was able to spend meaningful time with Sheri was when she and the other judges in her circuit and an adjoining circuit hosted the NCJFCJ’s Multi-disciplinary Child Abuse and Neglect Institute in Atlanta. As always, Sheri was engaged and encourage everyone to get as much out of that opportunity as possible. She was quite the taskmaster, but she never pushed anyone any harder than she pushed herself. Sheri had a vision for her court, and she gave it wings so that it could soar. She made everyone around her better. We were blessed to know Sheri and she will be missed.

Judge Sheri Roberts will be greatly missed. Although I only knew Judge Roberts through her years on the NCJFCJ Board of Directors, she made you feel like you were a lifelong friend. I reflect fondly on our dinners after our Board meetings and the time we spent together when she would come to our Reno office to meet with our team. We would share stories about our families, our challenges, and successes. I always enjoyed showing her all that our beautiful northern Nevada community has to offer.

Judge Roberts was deeply dedicated to the mission and vision of the NCJFCJ. She came to Reno periodically and would work from our office so that she could make sure to get to know us and better understand our internal operations. This experience gave her further insight into her role on the Board and she was instrumental in helping us make needed changes in our organization. She was not only a talented professional but also a trusted and compassionate person. She would spend time with us, get to know our work, and motivate us. She wanted to make sure we were as excited about the NCJFCJ as she was!

As the new CEO, Judge Roberts embraced me with hope, support, and her strength. She was without a doubt “Council First”! I will miss our talks and her coaching. She was known for asking, “Why not?” She was fearless and I knew I could depend on her for sage advice and encouragement to always do better. And, that is what we will do in her memory, we will continue, to do better.