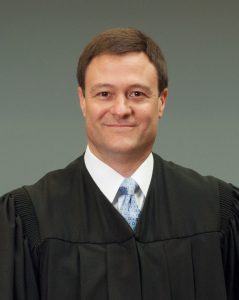 A native of Mason County, Texas, Judge Hofmann brings more than 20 years of public service to the State of Texas, having served as Mason County Attorney, as judge for the Child Protection Court of the Hill Country, and now as the district judge of the 452nd Judicial District of Edwards, Kimble, Mason, McCulloch and Menard Counties. He presides over felony criminal, general civil, family law and dependency/delinquency hearings in his five-county, 7,000-square-mile district, which includes federally recognized border and Interstate 10 corridor counties.

In 2011, he was named Texas CASA Judge of the Year, and appears as the judge in its statewide training video. He has served on several committees and boards of state and national organizations, and worked with the National Center for State Courts to create the first national ASFA (Adoption and Safe Families Act) Well-Being Outcomes.

“Few people bring to family law cases and to those involving foster children more determination, creativity and acumen than Judge Hofmann,” said Nathan L. Hecht, Texas Supreme Court Chief Justice. “His leadership as vice-chair of the Texas Supreme Court’s Permanent Commission on Children, Youth and Families and his tireless work to assure children in foster care succeed even beyond secondary education demonstrates a holistic approach to child-welfare issues. I am pleased this work now extends to an organization as vital as the National Council of Juvenile and Family Court Judges.”

In 2016, Education Reach for Texans formally recognized his work as chair of the Children’s Commission Foster Care and Education Committee to improve educational outcomes for children. He is a member of the College of the State Bar of Texas and Sustaining Life Fellow of the Texas Bar Foundation. He recently served as the Texas judicial representative to the U.S. Children’s Bureau State Team planning meeting, and was a community leader in the creation and organization of Bluebonnet CASA.

“Beginning with the creation of Bluebonnet CASA and continuing today with his work in improving the educational outcomes for all foster youth throughout the state, Judge Hofmann has consistently been a staunch champion for CASA and, more importantly, for Texas children and families,” said Lisa Goehmann, executive director, Bluebonnet CASA.