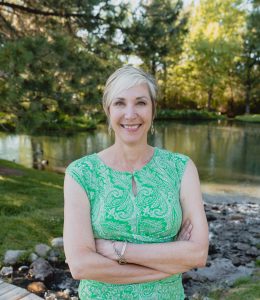 The National Council of Juvenile and Family Court Judges (NCJFCJ) announced Margaret M. Crowley, Esq. as the Impact of the Year Award recipient during the 6th annual Justice Innovation Awards ceremony at the NCJFCJ’s Virtual 83rd Annual Conference. Crowley was recognized for her work and efforts to innovatively rethink, reimagine, and redefine justice for children and families, thus advancing the NCJFCJ’s vision—a society in which every family and child has access to fair, equal, effective and timely justice.

The Impact of the Year Award recognizes, from the Annual Conference-host state, Nevada, an individual, state/local court, law firm, advocacy group, or service provider who has been instrumental in leading or implementing significant improvements or innovations which advance the mission of the NCJFCJ in any of the following ways: Practice improvements implemented state or jurisdiction-wide; state/local legislation or other regulatory improvements; unique state/local court programs or services; courtroom management and/or technology; and/or extraordinary efforts in pro bono work.

“It is the NCJFCJ’s honor to recognize the outstanding work of Margaret Crowley,” said Joey Orduña Hastings, NCJFCJ CEO. “Conflict resolution is one of the most critical skills in family law and her work is imperative to the NCJFCJ’s mission. We’re proud to recognize her tireless commitment and high degree of experience in helping resolve conflict through mediation and other problem-solving approaches to serve the Nevada community.”

Crowley currently serves as the contract administrator for the Nevada Supreme Court’s Administrative Office of the Courts Juvenile Dependency Mediation Program (JDMP) and has been a part of the program since its inception. She trains the program’s mediators, manages mediation assignments, addresses problem mediators, and conducts regular dialog with mediators to improve program outcomes. Margaret has also consistently provided leadership and innovation for the program and was recently instrumental in bringing a remote mediation training and the necessary video conference tools to mediators to help continue moving the program forward during COVID-19.

“Margaret is instrumental in the Juvenile Dependency Mediation Program, which currently has a 70 percent agreement rate,” said John McCormick, assistant court administrator, Administrative Office of the Courts, Nevada Supreme Court. “She has provided guidance on program design and helped evolve it into a program that the Nevada Legislature supported with nearly half-a-million dollars during the 2019 session. Margaret has provided innovation in training mediators by developing a training for mediators on recognizing and working with domestic violence dynamics and situations that are often encountered in dependency mediation. She is truly an innovator in the area of juvenile dependency mediation.”

Crowley is the principal at Crowley Mediation in Reno, Nev. and has been licensed to practice law since 1991. For more than 15 years, Crowley served as a Civil Deputy District Attorney for Washoe County, Nev. During that time, she practiced in multiple areas, including labor/employment law, contract law, litigation and administrative law, and in multiple settings such as mediations, arbitrations, administrative hearings, and state and federal courts. Crowley has extensive training and experience as a mediator, enabling her to use her expertise in conflict resolution to help people define and resolve issues. She has mediated more than 900 cases in a wide variety of areas. She has received specialized training in advanced mediation techniques, elder care, divorce, and foreclosure mediation. Crowley also serves as a member of the Advisory Board for the Saltman Center for Conflict Resolution, which is associated with UNLV’s Boyd School of Law. Crowley holds degrees from the University of Nevada, Reno (B.A. Literature, with distinction) and the University of California, Davis, School of Law (Juris Doctorate).

The NCJFCJ also honored Judge Peter Sakai of Bexar County, Tex. as the 2020 Innovator of the Year Award recipient to for his leadership, new ideas and solutions to help resolve issues of child abuse and neglect and family violence.