The National Council of Juvenile and Family Court Judges (NCJFCJ) has selected 12 new state and tribal courts to join their Implementation Sites Project, which seeks to improve outcomes for abused and neglected children and their families.

The NCJFCJ’s Implementation Sites Project, which is funded by the U.S. Department of Justice, Office of Juvenile Justice and Delinquency Prevention, provides child abuse and neglect courts with training, technical assistance, and tailored support from a site manager to improve the handling of dependency cases and improve the lives of families and children.

Each site selected will use a judicially led collaborative stakeholder team to assess current practices, identify goals, and implement change to improve their court practices and the delivery of services to families and children. The NCJFCJ selected the following courts to join the Implementation Sites Project:

These 12 new courts will join the current roster of 25 state and tribal court Implementation Sites across the country, bringing the total to 37 jurisdictions working with the NCJFCJ to implement best practices in the handling of child abuse and neglect cases.

“We are thrilled about the opportunity to participate in the NCJFCJ’s Implementation Sites Project,” said Magistrate Lori Morgan, lead judge of the Allen County Superior Court, Ind. “The idea of developing strong collaborative relationships, implementing best practices, and improving court systems for the benefit of children and families in our county is a shared mission with the NCJFCJ and is an amazing opportunity for our community.” 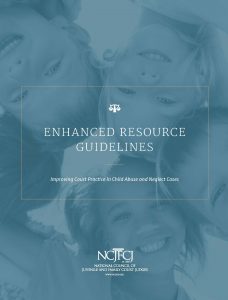 As part of their involvement in this project, Implementation Sites will work to make meaningful change, evaluate progress, as well as share challenges and successes with other courts across the country. The Implementation Sites will integrate promising practices, as defined by the NCJFCJ’s Enhanced Resource Guidelines: Improving Court Practices in Child Abuse and Neglect Cases to guide their system reform efforts.

“We are pleased to be selected by the NCJFCJ and are enthusiastic to begin working to learn new and innovative ways to implement best practices to improve our juvenile court system,” said Judge Hurtado.

Founded in 1937, the Reno, Nev.-based National Council of Juvenile and Family Court Judges, is the nation’s oldest judicial membership organization and focused on improving the effectiveness of our nation’s juvenile and family courts. A leader in continuing education opportunities, research, and policy development in the field of juvenile and family justice, the NCJFCJ serves an estimated 30,000 juvenile and family court professionals and is unique in providing practice-based resources to jurisdictions and communities nationwide.