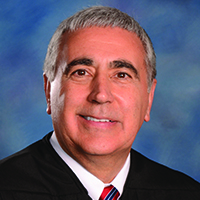 (Washington, D.C.) – The Honorable Anthony (Tony) Capizzi of the Montgomery County Juvenile Court, Ohio is the National Council of Juvenile and Family Court Judges’ (NCJFCJ) 2017-2018 president of the board of directors. He is the 11th NCJFCJ president hailing from Ohio.

Judge Capizzi was elected Montgomery County, Ohio Juvenile Court Judge in 2004. He previously served as an Acting Judge for Dayton Municipal Court and in private practice for more than 25 years. Judge Capizzi is admitted to the Ohio and Federal Bar, received his J.D. from the University of Dayton School of Law and a B.A. from Saint Bonaventure University.

“Judge Capizzi is a nationally recognized leader and at the forefront of juvenile justice and family law issues,” said Joey Orduna Hastings, CEO of the NCJFCJ. “With Judge Capizzi leading the charge, I am confident that the NCJFCJ will continue to do its most innovative and cutting-edge work yet for children and families who seek justice in our courtrooms.”

Judge Capizzi was the proud recipient of the Distinguished Alumni Award from the University of Dayton School of Law in 2015 in recognition of his distinguished service to the community and to the law school.

Judge Capizzi has overseen the growth of Treatment Court and the implementation of a Juvenile Mental Health Court and Family Mental Health Court. He led the initiative to create the Evening Reporting Center in partnership with Mt. Enon Baptist Church, implemented the Juvenile Detention Alternative Initiative, initiated the Pro Se Services program to help those clients that choose to file legal documents without attorney representation, and strengthened the Court’s Reclaiming Futures and Natural Helpers programs to better serve youth and their families in our community. In addition, Judge Capizzi led the Court into the 21st Century technology-wise and streamlined the hearing process by implementing more efficient case action procedures, which include the process by which attorneys and parties receive their court entries in hand at the conclusion of each hearing.

Judge Capizzi serves on the National Advisory Committee for the ABA Homeless Youth Legal Network and the Stewards of Change Institute National Board. He also serves as a Senior Judicial Fellow for Reclaiming Futures and supervises national Reclaiming Futures judicial training.

Judge Capizzi served on the U.S. DOJ Global Justice Information Sharing Committee (GAC), and as a member of the Global Strategic Solution Working Group, Corrections Management and Reentry Task Team Chair and on the Global Advisory Committee Executive Board from 2007 – 2014.

Judge Capizzi was elected Secretary of the Ohio Judicial College in 2016 and is a former President of the Ohio Juvenile Court Judges Association. He lectures at state and national conferences focusing on judicial leadership, juvenile treatment courts, substance abuse, the roles and responsibilities of guardians ad litem, juveniles’ rights in delinquency court, abuse, neglect and dependency, racial and ethnic disparity, privacy, data and information sharing/exchange and mental health issues.

“What is particularly noteworthy about Judge Capizzi’s efforts is that they are appreciated in equal measure by the youth and their parents,” said Ohio Chief Justice Maureen O’Connor. “He has made success stories out of the most hardened youth, and believers of the most frustrated, angry and helpless parents.”

Judge Capizzi is known as a workaholic and remains enthusiastic and energetic about working to promote the welfare of children, as has been his focus throughout his legal career.