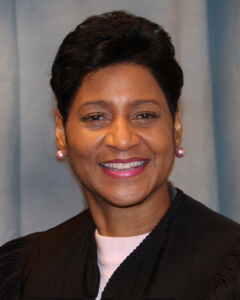 The National Council of Juvenile and Family Court Judges (NCJFCJ) congratulates Pennsylvania family court Judge Kim Berkeley Clark, who has been named the recipient of the 2017 William H. Rehnquist Award for Judicial Excellence, the highest honor bestowed to a state court judge by the National Center for State Courts (NCSC). Judge Clark has earned a national reputation for transforming the way children and families who enter the court system are treated, by creating a “trauma-informed” courthouse.

The Rehnquist Award recognizes a state court judge who possesses integrity, fairness, open-mindedness, intellectual courage, and sound judgment. Judge Clark, of the 5th Judicial District of Pennsylvania, will be presented the award in November during a dinner at the U.S. Supreme Court hosted by Chief Justice of the United States John G. Roberts Jr.

“I am very honored and surprised to be the recipient of the 2017 William Rehnquist Award from the National Center for State Courts. This is perhaps the highest award that a state trial or appellate court judge can receive,” said Judge Clark. “I know some of the past recipients and feel privileged to be in their company. What is most important to me, however, is that staff in the Family Division nominated me.”

“The National Council of Juvenile and Family Court Judges deserves much of the credit. We began our transformation to a trauma-informed family court through our Model Juvenile Justice Court. We adopted a key principle as the overarching theme for the entire Family Division and our transformation: respect and understanding – all members of the juvenile delinquency court shall treat youth, families, crime victims, witnesses, and others with respect, dignity, courtesy and cultural understanding.”

Judge Clark has been an active member of the NCJFCJ since 2005 and fulfilled two terms as a member of the Board of Directors from 2008 to 2015. Under the leadership of Judge Clark, the Allegheny County Court of Common Pleas, Family Division, was chosen as one of the NCJFCJ’s Implementation Sites. The Implementation Sites Project builds on the long history of the NCJFCJ’s child welfare work since the 1970s and court improvement efforts since 1995 with the release of the Resource Guidelines: Improving Court Practice in Child Abuse and Neglect Cases.

Since becoming an Implementation Site in 2014, with the guidance and judicial leadership of Judge Clark, the court actively accomplished recommendations contained in NCJFCJ’s trauma audits and site visits, all focused on improving outcomes for children in care. These initiated major reform including changes to the internal physical structure, changes in scheduling of cases, and training for both court staff and stakeholders in trauma, implicit bias, domestic violence, and cultural competence.

The court has also introduced a Therapy Dog Program and modified an Introduction to Sexual Orientation, Gender Identity, and Expression (SOGIE) training to help court personnel address the needs of lesbian, gay, bisexual, transgender, queer, or questioning youth and their families.

“On behalf of the members of the National Council of Juvenile and Family Court Judges, I would like to congratulate Judge Kim Berkeley Clark for this well-deserved honor,” said Judge Anthony (Tony) Capizzi, NCJFCJ president. “Her long history of work for children and families in Allegheny County and with the NCJFCJ is the example our fellow judges across the country should all aspire to emulate.”

Judge Clark works in Pittsburgh, but her programs have been replicated in courts across Pennsylvania and across the country.

Judge Clark was appointed to the Court of Common Pleas of Allegheny County by Governor Tom Ridge in March 1999.  She was elected to a full 10-year term in November 1999. Prior to becoming the administrative judge of the Family Division, she served as the Supervising Judge of Juvenile Court.

“The National Center is honored to present the Rehnquist Award to a state court judge who demonstrates the power of leading by example. Judge Clark is a leader who is committed to helping families,” NCSC President Mary C. McQueen said. “Her work has dramatically improved the lives not only of those who have entered her courtroom but of thousands of other families.”