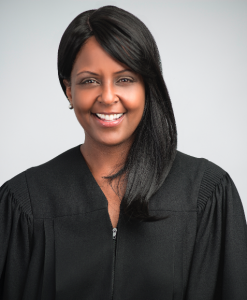 The National Council of Juvenile and Family Court Judges (NCJFCJ) has elected the Honorable Lori A. Dumas of the First Judicial District, Court of Common Pleas, Family Division in Philadelphia, Penn. to its Board of Directors.

As a judge who has served on the bench for more than 12 years, Judge Dumas is a consummate advocate for children, always aiming to render decisions that serve the “best interests of the child.” Judge Dumas led the city of Philadelphia in the creation and currently presides over the WRAP (Working to Restore Adolescents’ Power) Court, the First Judicial District’s Human Trafficking Court. WRAP is an innovative, new court program that seeks to provide alternatives to criminalization for minor victims of sex trafficking by providing specialized trauma-informed treatment to victims in the least restrictive and most holistic environment.

“Judge Lori Dumas sets the bar for innovative and trauma-responsive judicial decision-making,” said Judge Anthony (Tony) Capizzi, NCJFCJ president. “Her extraordinary work for children and families in Philadelphia will be an asset to the NCJFCJ and can propel us to the next level.”

Judge Dumas has participated in and facilitated many panels and trainings on human trafficking. She is a Georgetown University Fellow, specializing in the area of crossover court matters. Prior to her nomination to the bench in 2003 by former Governor Mark Schweiker and confirmation by former Governor Edward Rendell, Judge Dumas owned her own firm for nearly 10 years.

“Judge Dumas has placed herself at the forefront of juvenile justice reform through her development of the First Judicial District of Pennsylvania’s WRAP Court, which has reshaped the way young victims of human-trafficking experience our justice system,” said President Judge Sheila Woods-Skipper, Philadelphia Court of Common Pleas. “Her reputation for working to improve the lives of young people in Philadelphia is highly regarded and we’re incredibly proud of the way she has represented the judiciary, and our courts. She will be an asset to the NCJFCJ’s board, and serve as a testament to the benefits of forward-thinking and creative solutions in the area of juvenile justice.”

In addition to her professional responsibilities, Judge Dumas has worked tirelessly with a number of boards and organizations including: Women Against Abuse, Housing Association of Delaware Valley, NAACP, National Coalition of 100 Black Women, Urban League Guild, Alpha Kappa Alpha Sorority, Incorporated. She is also a member of The Philadelphia and Pennsylvania Bar Associations, the Clifford Scott Green Chapter of the NBA’s Judicial Council, the Juvenile Court Judges’ Commission, and Enon Tabernacle Baptist Church where she serves on a number of ministries.

Several awards and honors including the Women’s Way Powerful Voice Award and the Philadelphia Coalition for Victim Advocacy Judicial Court Award have recognized her passion and commitment to the legal community. Judge Dumas was also the inaugural recipient of the prestigious Innovator of the Year Award in 2015 by the NCJFCJ.

“I am proud to note the appointment of Philadelphia Judge Lori Dumas to the Board of the National Council of Juvenile and Family Court Judges,” said Chief Justice of Pennsylvania Thomas Saylor. “It is a fitting honor for Judge Dumas, who was the first-ever recipient of NCJFCJ’s Innovator of the Year Award for her creation of a pre-trial diversion program for minor victims of sex trafficking, known as WRAP Court: Working to Restore Adolescents’ Power. She is a national leader in advocating for fair and compassionate justice for children and families, and is highly regarded throughout the Pennsylvania judicial system.”

A native Philadelphian, Judge Dumas received her bachelor’s degree in sociology from Duke University. After obtaining her J.D. from North Carolina Central University School of Law, where she was a contributing author to the Law Review, she returned to her hometown. As a devoted public servant and talented professional, Judge Dumas seeks to ensure justice for the children, families, and communities that she serves.