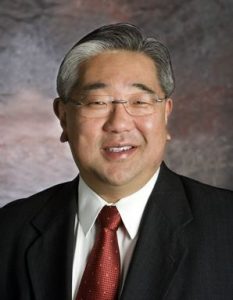 The National Council of Juvenile and Family Court Judges (NCJFCJ) announced Judge Peter Sakai of Bexar County, Tex. as the 2020 Innovator of the Year Award recipient during the 6th annual Justice Innovation Awards ceremony at the NCJFCJ’s Virtual Annual Virtual Conference. Judge Sakai was recognized for his work and efforts to innovatively rethink, reimagine, and redefine justice for children and families, thus advancing the NCJFCJ’s vision—a society in which every family and child has access to fair, equal, effective and timely justice.

The Innovator of the Year Award honors an active, in-good-standing NCJFCJ member who has inspired, sponsored, promoted or led an innovation or accomplishment of national significance in juvenile justice, child abuse and neglect, family law, and/or domestic violence.

“Judge Sakai is widely recognized for his innovative approach to child welfare, constantly challenging all involved in the system to more effectively serve the families that come into his courtroom,” said Judge Dan H. Michael, NCJFCJ president. “We are honored to call Judge Sakai a member of the NCJFCJ and commend him for his forward-thinking to help keep families together and improve children’s lives.”

“Judge Sakai is always inventive when it comes to new ideas on how to help youth in the foster care system,” said Barbara Schafer, programs administrator, Children’s Court Division for Bexar County. “Last year, with less than three percent of our aging-out-of-care youth going to college, he convened a meeting with the college university systems in our community, providing a connection to our foster care youth. Judge Sakai along with Court Appointed Special Advocates and the University of Texas at San Antonio drafted a bill for the Texas Legislature. Our entire San Antonio delegation, regardless of political party, supported this bill. We secured over three million dollars for two years. We now have 22 graduates attending one of the universities and community colleges in our city, 43 participants in our docket and 17 on a waiting list in only nine months.”

As a result of this work, the division created a College Bound Docket in the judiciary, with a specialized focus on education and education preparedness. The team hired a foster care youth to be their “expert” on youth matters and how the judiciary could better help young people. Through services aimed at improving self-esteem and improving young peoples’ ability to make responsible decisions, the docket is designed to bridge the gap between foster care and independent adulthood.

Judge Peter Sakai has more than 30 years of child welfare experience. In 2006, he was elected to the 225th District Court bench, succeeding his friend and mentor, Senior Judge John J. Specia. Judge Sakai has also served on numerous NCJFCJ committees, the Board of Directors, and has been an enduring and dedicated member of the NCJFCJ since 1980. Judge Sakai was born and raised in the Rio Grande Valley in South Texas. At the age of 27 years old, he was appointed to be the Chief of the Juvenile Section of the District Attorney’s Office. He left the D.A.’s office for private practice. In 1989, he was appointed to be the Juvenile Master/Referee of the 289th District Court (Juvenile Court). In 1995, he was appointed to the Children’s Court bench by the unanimous vote of Bexar County Civil District Court Judges. He was assigned to hear cases that involved child abuse and neglect and adoption involving foster children. Judge Sakai received his Bachelor of Arts degree from the University of Texas at Austin in 1976 and graduated with a Doctorate of Jurisprudence from the University of Texas Law School in 1979.

Through Judge Sakai’s leadership, adoption of foster children in Bexar County increased nearly 1000 percent from 1995 to 2005. Bexar County routinely leads the State of Texas for the number of foster children with consummated adoptions and permanent homes. For his efforts, President (then Governor) George W. Bush recognized Judge Sakai and his model court on the Governor’s Committee to Promote Adoption.

The NCJFCJ also honored Margaret M. Crowley of Reno, Nev. as the Impact of the Year Award recipient for her practice improvements implemented state or jurisdiction-wide in mediation and conflict resolution.