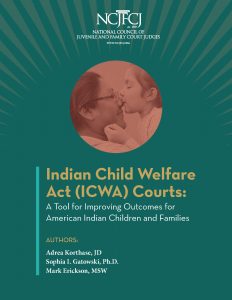 The St. Louis County Indian Child Welfare Act (ICWA) Court in Duluth, Minnesota, currently led by Judge Sally Tarnowski, is a dedicated docket of child welfare hearings involving Indian children as confirmed or presumed by the definitions outlined in the ICWA and the Minnesota Indian Family Preservation Act (MIFPA). The cases come to Judge Tarnowski either as identified by the county child welfare agency or transferred by another judge following an initial hearing, with the ICWA Court having the majority of cases involving Indian children. The docket is held in a specific courtroom and at a consistent time and day. The environment and characteristics of the hearing process are informed by regular Tribal State Partnership Team (TSPT) meetings as well as meetings of an ICWA Collaborative. Meetings by both of these groups have been an important part of the development (discussed below) of the ICWA Court, and its ongoing implementation.

In this publication, the ICWA best practice implementation experiences of the St. Louis County ICWA Court are featured, along with highlights from research evaluating its implementation, with the goal of providing guidance to other jurisdictions hoping to enhance their own ICWA implementation efforts and achieve positive outcomes for children and families. This technical assistance bulletin joins other publications developed by the National Council of Juvenile and Family Court Judges (NCJFCJ) regarding ICWA for use by judges, court staff, attorneys, child welfare professionals, and other stakeholders involved in child welfare cases, to provide guidance on practices that can be adopted to enhance ICWA implementation. While not every court may be in a position to implement an ICWA Court, they can start to implement the best practices discussed when working with tribal families and tribal communities.

How to Facilitate a Discussion about Child Sexual Exploitation in Your Community: A Facilitation Guide (Facilitation Guide) is a publication of the National Council of Juvenile and Family Court Judges (NCJFCJ). This material is made…

Teen dating violence, commonly known as dating violence, dating abuse, or relationship violence affects a wide range of young people from multiple backgrounds. This publication will explore some of the experiences and impacts of dating…