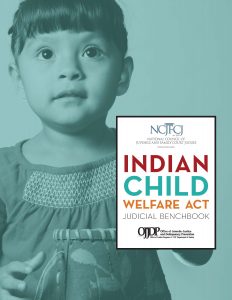 Congress passed the Indian Child Welfare Act (ICWA) in 1978 to address the widespread practice of state entities removing American Indian and Alaskan Native children from their homes and families. Congressional findings memorialized in ICWA included “an alarmingly high percentage of Indian families are broken up by the removal, often unwarranted, of their children from them by non-tribal public and private agencies and that a high percentage of such children are placed in non-Indian foster and adoptive homes and institutions.”

“In order to best serve the children and families of our community, we must develop and support collaboration between state and tribal court systems,” said Hon. Richard Blake, Hoopa Valley Tribe, president, National American Indian Court Judges Association. “The lives of our nation’s Native children and families are greatly improved when judges and system stakeholders implement ICWA. The NCJFCJ encourages compliance with this law and its requirements through its Indian Child Welfare Act Judicial Benchbook.”

“Our long history of work and commitment to the meaningful collaboration with tribal courts is filled with mutual respect and learning,” said Joey Orduna Hastings, NCJFCJ chief executive officer. “The NCJFCJ recognizes that the voice of tribal court judges and partnerships with organizations like the National American Indian Court Judges Association is a necessary component to strengthening the needs of all children and families served by state and tribal courts.”

According to 2015 data, across the U.S., American Indian and Alaskan Native children in out-of-home placement has remained highly disproportionate. American Indian and Alaskan Native children are overrepresented in foster care at nearly 2.7 times their rate in the general population; nearly double the rate in 2000. Congress enacted ICWA “to protect the best interests of Indian children and to promote the stability and security of Indian tribes and families by establishing minimum Federal standards for the removal of Indian children from their families and the placement of such children in foster or adoptive homes or institutions which will reflect the unique values of Indian culture.” The standards of ICWA are considered the gold standard for children and families.

In 2003, the NCJFCJ published its first-ever checklists to guide judges and judicial officers in implementing ICWA. Viewed as a priority, the NCJFCJ Board of Directors also passed a resolution supporting tribal courts in 2011 and a resolution in support of full implementation of ICWA in 2013.

“The NCJFCJ is dedicated to supporting the needs and resources to effectively serve our nation’s Native children and families,” said Judge Anthony (Tony) Capizzi, NCJFCJ president. “Because of the alarmingly high overrepresentation of Native children in the foster care system, judicial leadership is necessary for ICWA compliance. This benchbook will assist judges with a step-by-step guide in meeting the ICWA requirements at each hearing stage.”

The Department of Interior, Bureau of Indian Affairs (BIA) promulgated federal regulations governing ICWA in 2016. These binding regulations provide additional definitions, timelines, and required judicial findings that must be made on the record in an effort to create more consistency in ICWA implementation. The statute and regulations together create the minimum federal requirements for Indian families. States may increase protections and requirements, but may not decrease them beneath the floor created by the law.

In response to these changes, the ICWA Judicial Benchbook was created for a national audience to build upon the original checklists with updated language to be consistent with the statute, regulations, and best practices, commonly promoted by the NCJFCJ. The ICWA Judicial Benchbook covers all stages of the court process, from the preliminary protective hearing until juvenile and family court involvement has ended, which leads to the child safely being returned home or placed in a new, secure and legally permanent home.

“Judiciary practices recommended by the NCJFCJ are held in wide respect by judges across the country,” said Kathryn E. Fort, director, Indian Law Clinic, Michigan State University. “This newly released Indian Child Welfare Act Judicial Benchbook, with its necessary updates, is the only publication of its kind specifically for state court judges. The NCJFCJ’s commitment to ICWA is commendable and this guide will help improve court practice for Indian children and families when they find themselves in state courts.”

This infographic and fact sheet were developed in conversation with youth survivors and 39 stakeholders who provide training and/or technical assistance on child sexual exploitation and youth interventions across the country. These resources are intended…

The focus of this Revised Chapter is on an approach that requires a careful analysis and tailored response, which means that adequate information is obtained (safely and ethically) and provided to the court, allowing for…