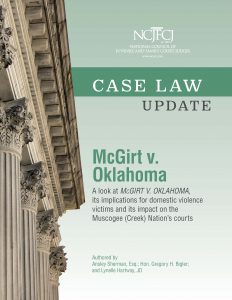 American Indian/Alaskan Native (AI/AN) women are more likely to experience intimate partner violence and sexual violence than women of other races, with 47.5% of AI/AN women having reported experiencing domestic violence in their lifetimes. Domestic violence and physical and sexual assault are three-and-a-half times higher than the national average in Native American communities; however, this number may not reflect reality, as many assaults are not reported.

Recently, the United States Supreme Court, in McGirt v. Oklahoma, recognized the continued existence of the Muscogee (Creek) Nation’s reservation, and as a consequence, that tribal and federal courts have primary jurisdiction to prosecute citizens of tribal nations for crimes committed within that reservation. This publication examines that decision, and its potential impacts to domestic violence victims and states and tribal courts in their efforts to address domestic violence. It also looks at the impact that McGirt has had on the Muscogee (Creek) Nation’s courts.

This document contains summaries of published state court decisions of interest related to a rebuttable presumption against awarding sole or joint custody to a parent who has engaged in domestic violence against the other parent.…

The NCJFCJ has prepared, The Role of the Judge in Transforming Juvenile Probation: A Toolkit for Leadership (hereafter also referred to as the Toolkit) to provide judges with practical strategies and recommendations to help their jurisdictions take…