“Given the overwhelming research connecting abuse of animals to abuse perpetrated on humans … it is incredibly important to include the link between animal and other forms of interpersonal harm in your work on and off the bench.”
~ Judge Katherine Tennyson, Retired

Judicial Leadership and the Link

A central tenant of the NCJFCJ’s work is encouraging judges to assume a leadership role on issues affecting children and families to improve access to justice, the administration of justice, and the lives of individuals who seek justice. Juvenile and family court judges have an important role in addressing, intervening in, and preventing interpersonal violence against household members, including pets, in juvenile or family law cases. To effectively carry out this role, judges need to have knowledge of the links between animal cruelty and interpersonal violence, the laws that recognize that animals can be crime victims, and the tools and resources that exist to promote the safety and wellbeing of both humans and animals. 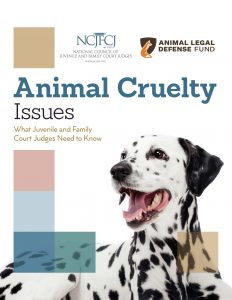