Domestic child sex trafficking occurs every day across the U.S. and can happen to any child. Children involved in child welfare and the juvenile justice system are particularly vulnerable to becoming victims.

As laws and systems change to identify and recognize sex trafficking as child abuse and victimization, processes to respond adequately to the specialized and complex needs of this population are critical to the NCJFCJ. The NCJFCJ believes juvenile and family court judges can play an important role in identifying child sex trafficking victims. Together, community and systems collaboration can better serve victimized children.

Through a resolution adopted by the NCJFCJ Board of Directors in February 2013, the NCJFCJ opposes the criminalization of victims of child sexual exploitation and supports state laws and policies that are in line with the federal definition of a minor victim of human trafficking. The NCJFCJ will promote the development of specialized services and resources for victims of child sex trafficking from the child welfare system, the juvenile justice system, and within the community at large. These services should include, but not be limited to, development of non-detention triage facilities and specialized placement options that are equipped to address effectively the unique trauma suffered by victims of child sex trafficking.

The NCJFCJ, with funding assistance from the Office of Juvenile Justice and Delinquency Prevention (OJJDP), developed a training curriculum for judges focused on the specific trauma experienced by child victims, identification of victims, and fashioning appropriate interventions and treatment plans. 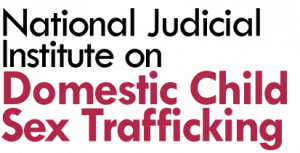 The National Judicial Institute on Domestic Child Sex Trafficking provides judges with a highly interactive educational opportunity to expand their knowledge of trafficking risk factors, victim identification, effective intervention strategies, cultural considerations, and more. Since 2014, the NCJFCJ has delivered National Judicial Institutes on Domestic Child Sex Trafficking to state and tribal court judges to train and inform the development of tools that judges can use on the bench to serve best the child victims of sex trafficking.

The NCJFCJ is committed to a future where children who are the victims of sex trafficking are identified as victims and provided appropriate trauma-informed services. Judges should be well educated about child sex trafficking to be better informed in their decision making and take a leadership role in communities to coordinate responses to domestic child sex trafficking.