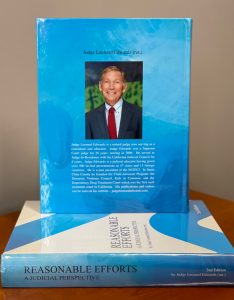 Reasonable efforts are efforts made to preserve and reunify families prior to placement of a child in foster care, to prevent or eliminate the need for removing the child from his or her home, and to make it possible for a child to return safely to his or her home.

This innovative second edition of the book, “Reasonable Efforts: A Judicial Perspective,” focuses on new laws that have passed to continue to address the reasonable efforts issue in child welfare court proceedings. It also addresses timely issues that affect oversight of social services in a community as well as national trends. “Reasonable Efforts” is made possible by the generous support of Casey Family Programs.

Judge Edwards is a retired judge and a past president of the NCJFCJ who is now a consultant, educator, and trainer. He served as a Superior Court Judge in Santa Clara County for 26 years and then for six years as Judge-in-Residence at the Center for Families, Children & the Courts, a division of the Judicial Council of California. As Judge-in-Residence, he served California’s courts as a consultant specializing in juvenile and family law, domestic violence, drug courts, mediation, judicial ethics, and other issues relating to children and families within the court system.

Judge Edwards is a well-known educator, having taught at the University of Santa Clara Law School, Stanford Law School, and the California Judicial College. He has conducted trainings in 48 states and 13 foreign countries and has delivered more than 500 presentations in the U.S.

Cost: $58 for NCJFCJ Members, $83 for non-members
(shipping included in price)