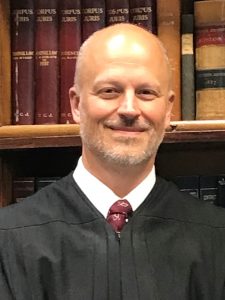 Prior to joining the bench in March 2017, Judge Parker was Cascade County Attorney for eight years, the elected chief prosecutor in his jurisdiction.  Judge Parker also served in the Montana House of Representatives for three terms where he was Chair of the Law and Justice Interim Committee and House Minority Leader.  Judge Parker and his wife, Carrie, have one son, Charlie.

Judge Parker has served on the Board of Directors of the Montana Meth Project since 2008.  He was also founding coordinator of the Cascade County Multidisciplinary Child Protection Team in its current incarnation.