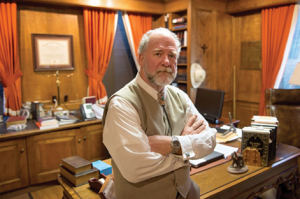 Dan H. Michael entered Memphis State University’s Cecil C. Humphreys School of Law at the age of 37. He worked his way through law school and volunteered with Court Appointed Special Advocates (CASA) during his second year in law school. He graduated at the age of 40 and entered the practice of law at Juvenile Court in 1993 as CASA Attorney at the invitation of Judge Kenneth Turner. In late 1993, he became Executive Director of CASA representing abused and neglected children at Juvenile Court.

In 1995, Dan H. Michael was appointed Chief Counsel to Judge Turner. In 1997, he became Magistrate Pro Temp.  In 1998, he was awarded the Child Advocacy National Certificate of Recognition by the American Bar Association of Young Lawyers for “Significant Legal Contribution to Advancing the Welfare of our Nation’s Children”. In 2001, Judge Turner appointed him to the bench as a full-time Juvenile Court Referee. In January 2013, Judge Curtis S. Person appointed him as Chief Magistrate and Special Judge.

In August 2014, Dan H. Michael was elected Judge of Memphis and Shelby County Juvenile Court. As Judge, he hears appeals from the twelve lower magistrates and presides over the major crimes docket, hearing the most serious felony cases at the Court. Judge Michael has judged cases in all dockets at Juvenile Court – child support, delinquency, abuse and neglect and termination of parental rights and transfers of juveniles to the adult criminal system. Judge Michael has dedicated his career to seeking justice for both the defendants and the victims.