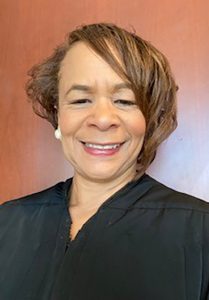 At the local level, Judge Carr has been proud to serve as the Lead Judge of the Fairfax County Best Practice Court, through the Court Improvement Program, which seeks to improve outcomes for children placed in foster care or involved in child protective services. Judge Carr has collaborated with both state and local agencies as well as community partners and attorneys to improve access to the court; provide training to lawyers regarding child dependency factors and dynamics including trauma-informed representation. Judge Carr participated in the Annie E. Casey Agents of Change Leadership program along with representatives of the Fairfax County Department of Family Services. This two-year long leadership program focused on improving outcomes for children placed in foster care and increasing permanency for adolescents placed in foster care. In addition, over the last decade, Judge Carr has served on the Healthy Families Fairfax Advisory Council, a prevention program, which serves families who are at high risk for abuse and neglect by providing home based services; parent education; health information; developmental screenings and referrals for community services. Judge Carr is also a Board Member of the Fairfax County Supervised Visitation and Exchange Center.

In addition, Judge Carr has worked with a number of other boards and organizations including serving as Treasurer of the Virginia Association of Women Judges (VAWJ); Secretary, District 4 of the National Association of Women Judges (NAWJ); a member of the faculty of the Virginia State Bar, Harry L. Carrico Professionalism course and an Adjunct Faculty Professor at George Mason University and Northern Virginia Community College. Judge Carr is also a Master of the George Mason American Inns of Court.

Judge Carr has participated in numerous programs including Continuing Legal Education trainings for lawyers as well as panels and trainings for judges; social workers; probation officers; Court Appointed Special Advocates; teachers and other educators. Judge Carr is a frequent presenter, educator, trainer and facilitator throughout the nation, Fairfax County and the Commonwealth of Virginia.

Prior to her appointment to the bench, Judge Carr served as an Assistant County Attorney for Fairfax County. Judge Carr has also served as an Assistant Attorney General for the Commonwealth of Virginia. She previously was engaged in the private practice of law where she practiced both civil and criminal law in state and federal courts. Judge Carr also served as a Child Welfare Worker. Judge Carr received her Juris Doctor degree from the University of Richmond in 1987 and her Bachelor of Social Work degree from Virginia Commonwealth University in 1984.

Judge Carr has received numerous awards and honors including: