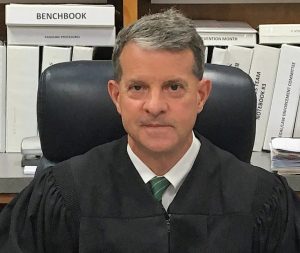 The Honorable H. Lee Chitwood graduated from the University of Virginia in 1983 and graduated from the TC Williams School of Law at the University of Richmond in 1986. Judge Chitwood practiced law in Wytheville, Virginia for 13 years, and he was a substitute judge for two years in the 27th Judicial District. He has been a fulltime Juvenile and Domestic Relations District Court Judge since 1999. He is now serving his second term as Chief Juvenile Judge of the 27th Judicial District.

Judge Chitwood chairs the Pulaski County Juvenile and Domestic Relations District Court Best Practices Team, the Pulaski County Truancy Committee, the Pulaski County Domestic Violence Committee, and he served on the Pulaski County Fatality Review Team. He currently serves on the Judicial Performance Evaluation Advisory Committee, the Judges’ Schools and Courts Committee, and the Advisory Committee on Domestic Violence Issues in Virginia. He is serving a second term as a mentor for new judges under Virginia’s Judicial Mentoring Program, and he was in the inaugural class for the Judicial Engagement Network (JEN) Fellowship Program in 2019. He also has been a Best Practices Judge for foster care matters since 2003. He received the 2019 VCCJA Award for Collaboration and Innovation. He also received the 2021 Lelia Baum Hopper Service Award. He has participated in the VTLA moot court competition for many years, and he is one of the contributors to the District Court Judges’ Bench Book. Judge Chitwood appears in the Washington and Lee documentary “Intimate Violence.” He is a member of the NCJFCJ Judicial Responses to Animal Cruelty Work Group. OVW named the Pulaski J&DR Court one of four nationwide domestic violence mentor courts.

Judge Chitwood previously served on the Education Committee, the Executive Committee, the Judges/Superintendents Liaison Committee, the Weighted Caseload Study Committee, and the Uniform Collaborative Law Act Study Group. Judge Chitwood served eight years on the Judicial Inquiry and Review Commission, with two years as Chairman. In collaboration with Gael Strack, Jaime Clemmer, and Madelynn Herman, Judge Chitwood created “12 Things Every Virginia Judge Should Know When Faced with Non Fatal Strangulation.” The Supreme Court of Virginia distributed this bench card to every trial judge in Virginia in December of 2020. Another of Judge Chitwood’s bench cards, Judicial Checklist for Motions to Dissolve Protective Orders, was mentioned in the December issue of the Link. Judge Chitwood resides in the beautiful mountains of Southwest Virginia, and he and his wife Pam have four wonderful children.