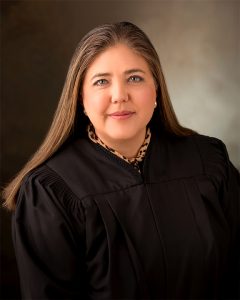 Judge Angela F. Fonnesbeck was appointed to the First District Court in August 2019 by Governor Gary R. Herbert. She was previously appointed to the First District Juvenile Court in October 2014 by Governor Gary R. Herbert. She serves Box Elder, Cache and Rich counties. Judge Fonnesbeck received her law degree from American University, Washington College of Law in 2000. Prior to law school, Judge Fonnesbeck received a dual B.A. in Politics and Asian Studies from Whitman College in 1997. Prior to her appointment, Judge Fonnesbeck worked in private practice from 2009 to 2014 where she focused on family law matters. As part of her practice, she also served as a public defender for Cache County and the cities of Providence, Richmond, Nibley, North Logan, and Hyde Park. Prior to managing her own law firm, Judge Fonnesbeck was a shareholder at Hillyard, Anderson & Olsen, P.C. from 2002 to 2009 where she focused on family law matters, criminal defense, juvenile court, general civil litigation and mediation. She also worked as an associate attorney for Perry, Malmberg and Perry in Logan where she focused on insurance defense. In her role as Judge she has presided over the First District Juvenile Mental Health Court, served on the Board of Juvenile Court Judges and the Utah Sentencing Commission, and currently presides over the Cache County District Mental Health Court. Prior to her appointment, Judge Fonnesbeck served in various leadership roles and on a variety of legal boards in the State and local bar organizations, as well as on other community boards and committees.