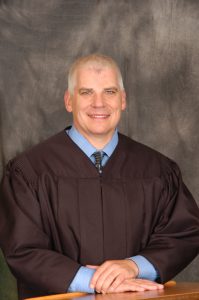 Judge Egan Walker is a District Judge in Washoe County, Nevada. Judge Walker has been a judicial officer since 2009 and has heard divorce, custody, guardianship, child support, and criminal matters. He is currently responsible for juvenile delinquency, juvenile dependency and Project ONE cases in Washoe County. He serves on the Nevada State Juvenile Justice Commission and the Nevada Supreme Court Commission to Study the Administration of Guardianships. He has an undergraduate degree in nursing from the University of Nevada, Reno, and graduated from the McGeorge School of Law in 1991. He has served as faculty at the National Judicial College and is a Master’s degree candidate in Judicial Studies.