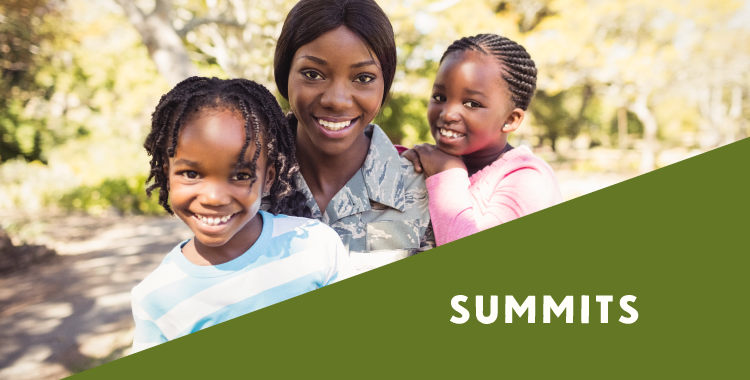 The NCJFCJ held the Second National Summit on Courts and Military-Connected Families (Summit) September 23-24, 2019, at the Saber and Quill Conference Center, Fort Knox, KY. The one-and-a-half-day Summit brought together members and staff of the military-related committees of the NCJFCJ, subject matter experts, representatives of national-level organizations that serve military-connected families, stakeholders with local and state government and nonprofit organizations, and members of the civilian and military communities of two demonstration sites selected for this State Justice Institute (SJI) funded project.

The Summit’s purpose was to further the national discussion by those who engage with justice-involved service members, National Guard, Reserve, and veteran populations on how best to assist them when they interface with juvenile and family courts. The 2019 Summit sought to be a focused and targeted “deep dive” into the realities of the information and practices needed to promote effective court-military systems communication and collaboration.

Under the auspices and leadership of the National Council of Juvenile and Family Court Judges, a first-ever National Summit on Courts and the Military (Summit) was convened in March 2015 at the U.S. Infantry Museum outside the gates of Fort Benning in Columbus, Georgia. The focus and goal of the Summit was to create the groundwork for a collaborative relationship between the courts and the many military institutions, civilian agencies, and government departments that serve and assist military families in need that access the civilian court systems.

Years in the planning, the Summit organizers brought together nearly 100 individuals representing all branches of government and the military: state court judicial leaders from across the country; armed forces personnel including former commanding officers; federal executive departments of Office of the Secretary of Defense and Veterans Affairs; federal and state legislators; and various service organizations for military families, together with academic, research, and policy groups with a keen interest in the welfare of the military family.

The goal of the Summit was met as participants developed action plans both modest and large. They identified current assets and noted the challenges and barriers that exist in achieving effective coordination of systems and organizations. As a group, they stand poised to assist military-connected families in the state court systems in a more informed, transparent, and effective manner.

The Summit succeeded in generating information sharing, excitement, and resounding commitment from this multi-disciplinary group of participants, with keen interest from these top leaders and experts for future collaborative work. Available funding will enable the vital work to continue and cement the connections and goodwill between organizations and leaders formed at this Summit.